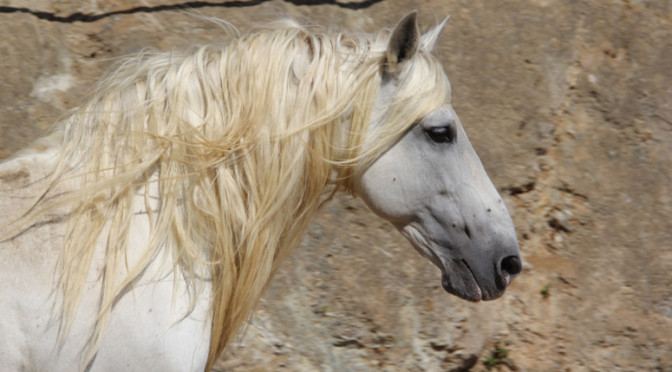 Our stallions – in their foals, each of them gets reflected in the corals of La Paz.
They are all very own personalities and we would never want to miss any of them.
A very big “thank you “ to all of them, for all theses beautiful hours we spent together and we still will have!! 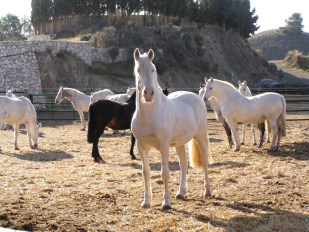 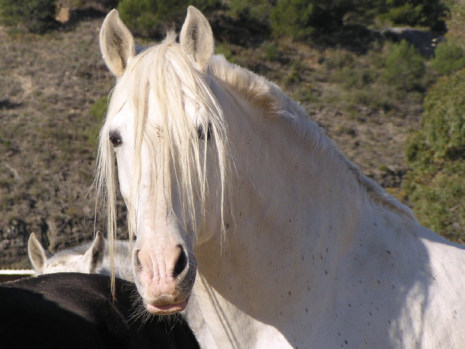 Novelero was born here on La Paz in 1987. His father “Sevillano” was a prime stallion from the Spanish military stud farm in Jerez, who was covering here for one season, his mother “Novela” was part of the old group of PRE mares.
Due to the horse plague and the associated transportation prohibitions Novelero got the qualification as PRE stallion with just 2,5 years from the Spanish military.
That is how his career as PRE stallion started – now so many years later the number of foals just can be estimated. But all of them got a big part of their father – his character, his own will, his ambition to work and his movements. A lot of them are on our trails and riding programs.
But Novelero not has been always “just” a stallion – he also had to demonstrate his qualities. With 3,5 years I started to ride him and trained him in classic dressage and we became a great team, knowing and trusting each other in any situation. Due to his temperament and will, he was not always easy – but always a 100% partner for me.
Novelero lived long years free and happy with his mares out in the corals and played with his foals the whole year over.
But as real “macho” he also watched over his herd and more than one got chased off the corals by him.

In summer 2006 we had to let him go – I will never forget him – because of this very special chemistry between us – because of all his foals living in the corals of La Paz.

Eringium I – a piece of jewellery, full of noblesse and ambition

In 1996 we had the problem to find a new stallion, as the young daughters from Novelero came over to the mares – and Eringium found us. 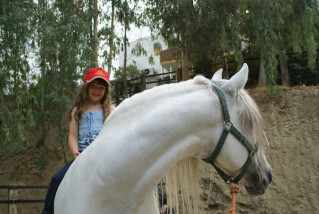 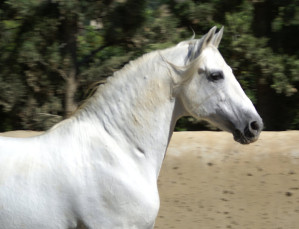 From the well known breed of Raphael Camacho Benitez (Ventura Benitez) he came as a 3 year old youngster to me to get ridden and later sent back to his breeder to Cabra/Cordoba, his homeland. But where love falls down…
He was the typical youngster – angular, strait but with an unbelievable charm and noblesse. After very long discussions with his breeder as we could not afford him it was clear that his future was in La Paz.
So we had, next to Novelero, a second PRE stallion with one of the best papers from Spanish breeders and all qualities we were looking for: noblesse, hardness, ambition, movement and a lot of beauty..
Grown up in the mountains of Cabra, he loved the routes in the area but also in the dressage work he showed a lot of fun and talent and I often had to stop his ambition. In all these years and all kind of situations, I always could trust him completely. He is still a charming boy, who wins everybody over.
His foals have all his trademarks – beauty, elegance, noblesse and ambition.

A heavy, high performance stallion with a heart of gold

Since June 2004 “Bruto II” is an important part of our breeding. He is a much heavier type with the same charming noblesse as the other two. He is a pure “Canadao” blood and came as youngster directly from the farm of his breeder in the mountains of Moron to us. With the time he became from a promise youngster to an expressive stallion. The first years he covered part of our PRE mares controlled. His foals present what we whished for – strong, expressive foals with good movements and a great character.
Bruto always wants to be advocated, shows a lot of temperament and ambition. In combination with his charm and great noblesse, it always was a pleasure to train him. Under the saddle he expanded to a horse that always wanted to learn – a horse that has and makes a lot of fun working with. 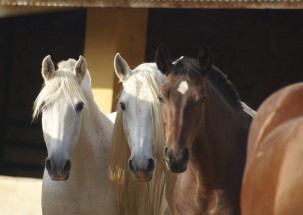 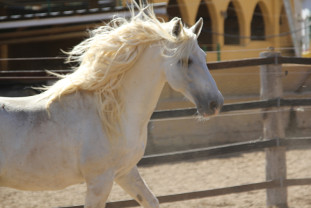 Because of healthy problems from my side I could not ride him every day and had to find a good solution for all of us. So now he is living free with his mares the whole year around, enjoying every moment I come to clean or spoon with him. Even after years living free with his mares we have this very special relation…
He is a great enrichment in our breeding and we are very proud of his foals.

Any cookies that may not be particularly necessary for the website to function and is used specifically to collect user personal data via analytics, ads, other embedded contents are termed as non-necessary cookies. It is mandatory to procure user consent prior to running these cookies on your website.